Milk...Not The Only Game In Town 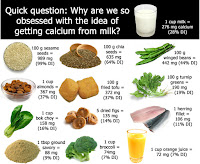 To help build strong bones and prevent osteoporosis which leads to fractures as we age, our diet should include a good source of calcium. I'm sure many know the slogan "milk does the body good" or seen the milk mustache person advertising the need for you to consume milk...a rich source of calcium...for strong bones and teeth. I hate to be the bearer of news that contradicts everything our moms have told us for years but studies are leaning towards milk not being the best source for  strengthening our bones to prevent osteoporosis in our senior years.
Several studies have found that women who consumed three or more glasses of milk a day had a higher risk of fracture and a higher risk of death. Men who drank three or more glasses of milk a day had a slightly higher risk of death -- mostly associated with cardiovascular death -- compared to those who drank less than one glass a day. And there was no reduced risk of fracture as milk consumption increased. Another thing to consider is that 65% of people are lactose intolerant so dairy causes stomach upset and sometimes chronic diarrhea.
Bone health is not only about calcium and there are definitely some lifestyle practices which  contribute to better bone health:
Read more about working to build and maintain bone health and alternate sources of calcium. 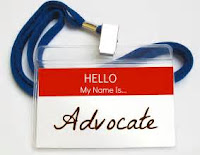 Better healthcare arises when it's consumers assume responsibility for their health and become empowered in their care . In addition to remaining current with routine and preventive health checks, the ability to help guide your practitioner throughout your relationship is vital. So what are some ways the healthcare consumers can be in partnership with their practitioner?
Remember, time spent with your practitioner is limited (hopefully 15-20 minutes) so the better prepared you are the better he/she can address your need. It isn't difficult to learn to be your own advocate...it takes time and work but who knows you better than you?
No comments:
Email ThisBlogThis!Share to TwitterShare to FacebookShare to Pinterest

My parents, probably just like yours, warned me that cannabis was not good for you. In fact when I was growing up it was considered the gateway substance to "harder drug use". But think, have you ever considered that although tobacco and alcohol use often precede marijuana use, they have never been coined as gateway substances. Though there may be a correlation that an individual who has tried marijuana would be exposed to and some receptive to trying a harder substance, there is no conclusive evidence that the effects of marijuana are causally linked to the subsequent abuse of other illicit drugs.
When cannabis use became legal in the District of Columbia, I began to do my research. Having lived years with chronic pain from degenerative arthritis and recently diagnosed with rheumatoid arthritis, my biggest fear was giving into using addicting pain medications for relief. The use of cannabis was not initially favorable either since I wanted to be functional and not stoned all day. From research I learned there was a way to consume cannabis without the undesired psychoactive effects. Using a tincture high in CBD and very low in THC relieved the chronic pain without the fuzzy head you get when you smoke it. Just recently I discovered another great way to benefit from the cannabis plant...juice it. Discover "10 Reasons Why You Need To Start Eating Raw Cannabis".
I have to interject I support learning and following the rules of safe and responsible cannabis use.
No comments:
Email ThisBlogThis!Share to TwitterShare to FacebookShare to Pinterest

Safety During the Storm

I remember growing up while at summer camp whenever it stormed the camp director insisted all lights out, televisions off and there be minimal conversation between us. My mother's storm warnings have always been never talk on the telephone and refrain from taking baths. I have to say I really didn't believe there was danger in any of them since we were inside. I now know they both were for the most point correct. Not too sure about the one where we couldn't talk with one another.
According to The National Oceanic Atmospheric Administration (NOAA) "over the last 20 years, the United States averaged 51 annual lightening strike fatalities placing it in the second position, just behind floods for deadly weather. In the US, between 9% and 10% of those struck die".
You can read more on the yearly lightening strike statistics at Struck By Lightening an advocacy non-profit started by a lightening strike survivor website.
In order to remain safe during thunderstorms it is important to know how to prepare and what to do  during and immediately after them. Take time to read Thunderstorm Safety to help keep you and your loved ones safety during the storm.

Grilling...The Flame Are Not The Only Hazard

There is a not so thought about hazard lurking around your grill that can cause severe injury. Many of us before we light up the grill grab that wire brush to clean off residue left from the previous grill. It is that wire brush that can be extremely hazardous if precautions are not taken. Read more about this hazard and how you can prevent injuries from wire bristles..." Wire-bristle brushes: A barbecue health hazard"
Don't know about you but after seeing the caption picture I am finding an alternate way to clean my grill.
No comments:
Email ThisBlogThis!Share to TwitterShare to FacebookShare to Pinterest
Newer Posts Older Posts Home
Subscribe to: Posts (Atom)