Back in the day...a phone was just that...a phone 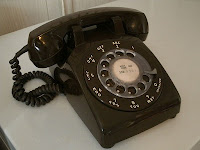 You've seen it...someone walking down the street and all of a sudden they disappear..they have fallen into the open man hole..OK...perhaps not that tragic..but no matter where you go there are lots of folks aimlessly walking and texting...paying absolutely no attention to what lies ahead. What happened to the good old days when a phone was just that...a phone. Read how teen pedestrian injuries are on the rise.
Put down the phone and walk! Teen pedestrian injuries on rise
No comments:
Email ThisBlogThis!Share to TwitterShare to FacebookShare to Pinterest

Contrary to what one of our Presidential candidates think is the answer for the uninsured this article discusses the issue and a plan that could produce a better outcome.
It Takes a Village :: Article - The Hospitalist
No comments:
Email ThisBlogThis!Share to TwitterShare to FacebookShare to Pinterest

More than just a problem of who will pay...but will you be able to be seen

First I want to say this is not about whether I am for or against health care reform, but for those who are curious, I believe everyone has a right to access care. Today, September 10th, I tried to make an appointment for a problem a family member was experiencing, though not an emergency, I felt it was something that warranted being attended to timely. This was not a new patient appointment but a follow-up to a problem that had occurred the previous year, so I am thinking I would be able to get an appointment within a couple weeks. When the young lady on the other end of the phone so calmly told me October 24th, I of course was dumbfounded. I politely said to her that my comment to follow had no reflection on her because I realized she was doing her job but it things like this that are one of the reasons that the emergency rooms around this country are full of non-emergencies. Why would anyone concerned about their health wait almost six weeks to be seen? Even, I, who is so much against folks using the emergency room as a source of primary care, would instead of waiting six weeks, go to my nearest emergency room. So I say, America, we have a real problem -There are just not enough doctors to go around for everyone to be seen. Health Care Bill: Will Newly Insured Be Able To Find Doctors? - ABC News
It has become increasingly important that we all being to take personal responsibility for our own health. The preventive health  model is a huge step towards doing so. We can no longer rely on waiting till something happens (such as a stroke) before we take action (monitoring our blood pressure, watching our calories, getting off our couches).
I don't claim to have the answers but one thing is for sure...we all need to begin to look around at what is coming and what some possible solutions could be (A PLAN) before it hits the fan.
1 comment:
Email ThisBlogThis!Share to TwitterShare to FacebookShare to Pinterest

Have a Question for a Physician? There’s an App for That | Highlight HEALTH 2.0

More than ever before, it is important to take an active role in your healthcare. Mobile apps are becoming a great tool to help accomplish this.

Have a Question for a Physician? There’s an App for That | Highlight HEALTH 2.0
No comments:
Email ThisBlogThis!Share to TwitterShare to FacebookShare to Pinterest

Learn more on this topic and the recommendations being made by the National Academy of Pediatrics.

Your numbers count and since September is Cholesterol Awareness Month it is a good time to check your numbers and understand what they really mean.

One of the things I look forward to in life is aging gracefully. I look around at older individuals and realize that aging brings with it a wealth of history, knowledge and oh so much humor that can be shared with others. My mother at her youthful age of 85 never seems to amaze me. In order to help ensure the ability to live life to its fullest as we age requires that we invest in keeping our body in the best shape possible along the way. September marks Healthy Aging Awareness Month. Check out Healthy Aging to get lots of helpful tips.